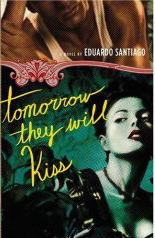 Eduardo Santiago was born in Manzanillo, Cuba, and grew up in Los Angeles and Miami. He earned a BFA degree from CalArts, and is a PEN Emerging Voices Rosenthal Fellow. His work has appeared in The Advocate, Zyzzyva, The Caribbean Writer, Slow Trains Literary Journal, The Los Angeles Times, Square Peg Magazine, and Infected Faggot Perspectives. He has worked on several television projects for CBS, Warner Brothers, and Telemundo networks. He currently lives in Echo Park, and teaches creative writing at Union Rescue Mission, downtown L.A.

In Eduardo's new novel, Tomorrow They Will Kiss, he has "created a kaleidoscope of female characters in a novel that is as irresistible and addictive as a telenovela. His Cuban women in exile will wrap you up in their stories, as they illuminate the immigrant experience in a tapestry of memory, dreams, friendship, nostalgia, and humor." (Booksense July 2006)

I wake up early, about 5 a.m., I make coffee, I smoke 2 cigarettes, I pray, meditate. By six or six thirty I sit down to write. I write until about noon or one. I don't write all that time, I also research, or I stop to read a page or two of a book that inspires me. My meditations are usually along the lines of "Please remove the obstacles in my mind so that I can access my imagination, my desires and my dreams." I always have an outline, or at least a plan of the next chapter I need to write. I stick to one project at a time. I don't jump around. I don't think I'm smart enough to do that. Sometimes a job comes along that promises instant financial gratification, and I'll take it. But those have solid deadlines. So I put away the fiction and do that. Literary fiction doesn't have solid deadlines, basically I just cut open a vein and I write until I'm out of blood.

When I was in my early teens my grandfather became a dumpster diver, and he would bring me books that the local five and dime had thrown out. Once he brought me The Female Eunuch, by Germaine Greer. I tried to read it but I didn't get it. Then he brought me Valley of the Dolls and I was HOOKED. So I became a diehard Jacqueline Susann fan, which I am to this day. I was really sad when she died, because the books stopped. Later I became only slightly more sophisticated. I still love romantic novels, and novels about glamorous but troubled people, like Dominick Dunne. Or his sister-in-law Joan Didion. I can recite passages from Play It As It Lays from memory. "Larry Kulik's not going to die at Cedars. Larry Kulik's going to die in a barber chair." Fabulous! One of my all time favorites that I've read a dozen times is Tender Is The Night by F. Scott Fitzgerald. The title of my novel, Tomorrow They Will Kiss, owes a lot to his title. I love everything by Thomas Hardy -- Far From The Madding Crowd is my favorite. I've read East of Eden a few times, particularly the Cathy chapters. I'm not always current with my reading. I just finished Bel Canto by Ann Patchett and I'm green with envy.

I'm very passionate about mental health. I have seen the same therapist on and off for 25 years. Her name is Susan, and she's been an amazing influence on my life and career. I do volunteer work at a homeless mission in downtown Los Angeles, what some people call Skid Row. I teach creative writing to men who were down and out and are now on their way back. I love working with those guys, I'm awed by their optimism. And their stories are spectacular. I think some are going to be anthologized and sold to keep the writing program going. I'm thrilled about that.

Very diverse. I don't like frantic music. I'm a big fan of Cuban Boleros, which are love songs. I have a CD collection called The 100 Best Boleros of All Time, and I use them to put me in a writing mood. I use music to inspire me to dig into my soul and call forth my writing. I'm big on anthems that celebrate the human spirit, like Natalie Merchant's "Wonder," Eminem's "Lose Yourself" from the 8 Mile soundtrack, and Madonna's "More" from the Dick Tracy CD. "More" is about greed, but I think it's also about abundance and learning that it's ok to ask the Universe to give you what you want. Finally, Motown and Disco. That's what I play when I'm frustrated with writing and I need to dance around the house with my dog, Lyon, to loosen up and not take myself too seriously.

I was born on a tropical island, so I love any island. Greek, Caribbean, Hawaiian. Anytime I'm surrounded by water I'm happy. There was a time when I took all my vacations, year after year, in New York City, the ultimate island. Finally, I lived there for a year and that took away the obsession. It was the best year of my life so far. I'm planning to visit Cuba again, but it's so complicated!

Why I write what I write is a complete mystery to me. All I know is that I get very excited in an unusual way. Sort of like I have a fantastic secret and I want to share it with someone. Sort of like when you have really great, mind-blowing sex and you can't wait to tell your best friend. Although my work is not particularly erotic, the process is very sexual, very orgasmic. Better than sex, actually, or maybe just different. It's beyond description. When I'm deep in the world of my characters and my fingers are flying over the keyboard, I can actually get erections.

I smoke. And I worry. I don't drink alcohol or do drugs. If I could stop worrying I could probably stop smoking. But for now, it's my crutch. I'm working on it and trying not to worry about it. Hmm...

Love and Betrayal. Ten years ago I fell in love, and two years ago I suffered the most stunning betrayal (same person). It has been one of the hardest, most excruciatingly painful experiences of my life. Fortunately, three months after the break up I sold my novel, so that helped.

Huge novel. Cubans again, but an earlier time period. The first draft is about 800 pages, so I have a lot of work ahead. I'm really proud of this book, it is epic but fun. More Jacqueline Susann or Margaret Mitchell than say, Tolstoy or Dostoevsky. My friend Alex said, "So, it's Epic Novel For Dummies?" He's funny. I also have a collection of short stories, two of which Slow Trains has published, that I would love to see become a book. I have a lot of books I want to write. A lot of ideas. Creatively, it's a very exciting time for me. 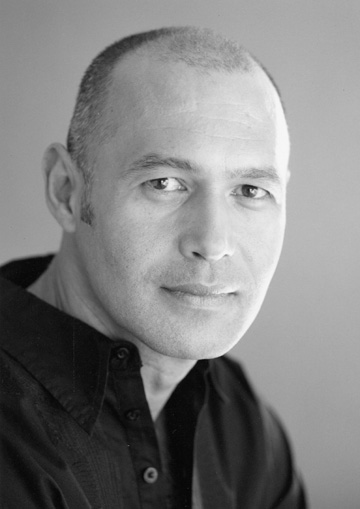