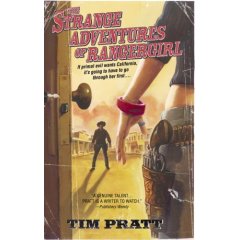 His first novel, The Strange Adventures of Rangergirl, was published by Bantam Spectra in November 2005. His first collection, Little Gods, was published by Prime Books in 2003. His second collection, Hart & Boot & Other Stories, is coming from Night Shade Books in July 2006. By day he works as an editor and book reviewer at Locus magazine. His short fiction has been nominated for the Nebula Award, and in 2004 he was a finalist for the Campbell Award for Best New Writer. He won the Rhysling award (for poetry) in 2005 for his poem "Soul Searching."

I used to think I started writing in the fourth grade, when I was about 9 years old, because that was the oldest notebook I had with fiction inside. It was a story about a kid pursuing his runaway little brother into another universe, full of alligator men and spiders with human heads; it equally ripped off Judy Blume and The Twilight Zone. Then, a few years ago, my mom showed me a story that had actually been published in a school magazine when I was in 3rd grade, called "A Day in the Life of a Spider." (The title pretty much telegraphs the plot.) If there's earlier work, I don't remember it. I've been writing more or less steadily ever since, which means I've been at this for more than 20 years now. Looked at that way, it's taken me a remarkably long time to accomplish anything! I wrote about 300 pages of a novel when I was in junior high (it wasn't very good), and probably about 150 stories in high school. I used to have a big list of all the titles, but I lost it years ago. It wasn't unusual for me to write four or five stories in a single week. Then, in college, I slowed down and actually tried to learn some craft. Now I write four or five stories a year, but I think they're much better stories.

Ah, right. Routine. I keep meaning to get one of those. I write when I want to. Fortunately, I'm one of those people who takes a compulsive joy in the act of writing, so I want to do it frequently. I spend a few hours a week at the keyboard, or with a notebook. If I have a deadline -- either self-imposed because I'm trying to finish a project, or imposed by an editor -- I really immerse myself, and spend days doing little but writing. It's probably not a healthy process, but it's worked for me so far. I'm almost constantly thinking about writing, running scenes in my head or playing with phrasing, making up dialogue, trying to think laterally and take my plots in unexpected directions. I work full-time for a trade publishing magazine, but I've managed to arrange my schedule so I get a couple of extra days off each month, and those are my dedicated writing days.

Favorites tend to be current, and influences tend to be older and obscure. I think I can honestly claim Stephen King, Jonathan Carroll, and Charles de Lint as influences -- they were three writers who really wowed me when I was young and systematically reading my way through the science fiction section of the local library. And, for non-fiction, Edith Hamilton -- I read her Mythology several times as a kid. My favorite short story writer now is Kelly Link. My favorite novelist is probably still Jonathan Carroll, for books like Outside the Dog Museum and From the Teeth of Angels. Both of those writers have a gift for wrenching reality halfway into the fantastic -- often a very dark variety of the fantastic. I've never been very enamored of "high fantasy" -- with elves and trolls and so on. It can be done well, and there are books in that vein I enjoy (Greg Keyes and George R.R. Martin both write very gritty, original epic fantasy novels), but I've always preferred to explore the tension between the magical/surreal/fantastic and a real, contemporary world. There's a whole wave of newer writers, mostly doing short stories, who write work I adore -- Theodora Goss, Christopher Barzak, Barth Anderson, Jenn Reese, Greg van Eekhout, Benjamin Rosenbaum, Christopher Rowe, and others.

Romance. Friendship. Movies (and really good television, on DVD, sans commercials). Reading, cooking, and talking about art. Music (as a listener, not a practitioner).

My favorite band at the moment is Rilo Kiley, and the music I most prize tends to be of the indie-rock or alt-country variety. I'm a great fan of smart, odd, quirky lyrics. As for how music influences my writing, I think it actually works the other way -- I choose music that complements whatever I'm working on. My first novel, The Strange Adventures of Rangergirl, has a lot of Western elements, so while writing it I listened to a lot of alt-country, insurgent country, cowpunk, or whatever you want to call it -- weird fusions of country and rock, like Wilco, Sun Volt, Uncle Tupelo, The Two-Dollar Pistols, Whiskeytown, and the Old 97s.

I'm from the south, and I still enjoy going back. I like Savannah, Georgia, and love the mountains of North Carolina -- hiking, rock-hopping, laying on the hood of a car in the dark of night and looking up at those piercing bright stars. I recently visited Hawai'i (Maui and the Big Island) for the first time, and fell in love with it, especially the Big Island. I get down to Santa Cruz, California whenever I can (I live about two hours north in Oakland), and that's probably still my favorite place in the world. My novel is a love song to Santa Cruz, really.

I get ideas from everywhere. From books, conversations, and midnight speculations. I get lots of ideas in the shower, and while washing dishes, while taking walks, and while playing basketball. Getting into some sort of physical activity often frees up my mind, or stimulates it, or something. I run mental scenarios, make up dialogue, and play the "what if?" game constantly. Inspiration is all around -- you just have to attune yourself to it. I had a teacher in college, a fine poet, who told me that the most crucial step in writing poetry was to tune yourself, make yourself into an observer and recorder, so that you could accurately recall and describe experiences (both emotional and physical). I've tried to do that with my life.

I once had a taste for hallucinogenic drugs, but since college the responsibilities of a full-time day job and a marriage have made that a less viable recreational option. I don't know that it helped my writing, particularly, except that I can write convincingly from the point of view of people on those sorts of drugs. It didn't hinder me either, though. I'm lucky -- I don't have an addictive personality, and I seldom messed with drugs that were physically addictive, not even cigarettes. These days, my only vice is drinking too much coffee, and that certainly helps my writing, especially by keeping me from falling asleep.

Sure, yes, all that "foul rag and bone shop of the heart" stuff. I write a lot about love, and the responsibilities of love, and the dangers, and the rewards. It's been pointed out to me that I write a lot about death, too. One theme I come back to over and over is the notion of creating your own community, making your own family out of the people you meet and learn to trust and respect. Mostly, though, I try not to think about my themes. I write about people, and situations, and hope that my themes will emerge organically.

I just sent my agent a finished (I hope) manuscript for a contemporary fantasy novel called Blood Engines, which involves sorcerers, poison frogs, sex parties, magical transformations, prophecies, and the need for friends in a difficult world. I'm about a third of the way through writing a novel I'm tentatively calling The Light of a Better World, about bridges, persistent suicidal ideation, and the quest for transcendence. (But don't worry. It also has car chases and chrome-plated shotguns, so it's not too philosophically ponderous.) I have a collection coming from Night Shade Books in summer 2006, called Hart & Boot & Other Stories, with all my best stories from the past few years. My editor tells me they're mostly love stories. That sounds about right to me.

For more information about Tim Pratt, see his Web site.