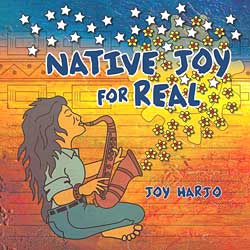 Native Joy for Real is Joy Harjo's new CD release, long-awaited since the appearance of her award-winning Poetic Justice CD, Letter From the End of the Twentieth Century. This project marks a shift in her musical style and accomplishment, from a native dub jazzy-reggae spoken word to a song-chant-jazz-tribal fusion, with Harjo singing. Her voice has been compared by early reviewers of the preview CD to Suzanne Vega or Sade.

Joy Harjo's books of poetry include How We Became Human: New and Selected Poems; A Map to the Next World: Poems; The Woman Who Fell From the Sky, which received the Oklahoma Book Arts Award; In Mad Love and War, which received an American Book Award and the Delmore Schwartz Memorial Award; Secrets from the Center of the World; She Had Some Horses; and What Moon Drove Me to This?. Her many honors include The American Indian Distinguished Achievement in the Arts Award, the Josephine Miles Poetry Award, the Mountains and Plains Booksellers Award, the William Carlos Williams Award, and fellowships from the Arizona Commission on the Arts, the Witter Bynner Foundation, and the National Endowment for the Arts. She now lives in Hawaii, and teaches at UCLA and the University of Hawaii.

Not until I was in my early twenties. Writing was set off by crisis...the crisis of an age, by injustice and the need to find words to convey what my paintings couldn't. Funny, I never considered it quite that way until now. And then took up music to go beyond the words.

Routine. I wish. When I have a solid routine I write early in the morning...then come back and hammer away at it at night. Lately I've been up at 4:30 to 5AM and have been writing. I'd rather sleep a little longer, but it's the cycle right now, brought on by vicious jet lag on my return from South Africa. What I've found is that consistency is important, whether it be writing, playing music, working out, whatever it is. It's important to have that consistency.

My favorite writers include Jean Toomer, Leslie Silko, Ray Young Bear, Were Were Liking, Toni Morrison, and recently I have been reading Mary Oliver. The strongest? Depends on when. Actually, Pablo Neruda had a very strong influence on me when I first began writing. Then Galway Kinnell. And Borges.

Saxophone. And various strands of mysticism. And outrigger canoe paddling and racing.

I listen to just about everything. Actually, I love Persian musics, Urdu, Flamenco, raunchy 49 songs (contemporary native song form), the jazz of Coltrane and others who play for heart not technical acrobatics...and yes of course it influences my writing. I've been writing my own songs, wrote all of the ones in my new album, Native Joy for Real. Some are poems that were translated directly to lyrics, like "Grace". Others I lyricized, like "Woman Hanging from the 13th Floor", and others I wrote solely as lyrics.

Paris. I could live there. Ditto for Cairo. And the South Pacific. And Italy of course, around Lucca and Rome.

I wish I knew so I could be inside that place always.

Hmmmmm. I don't know if they're "interesting"...is laziness interesting? I don't think so. And I don't think horses are a vice, unless you bet on them. Buying guitars, maybe. Or keeping up with the latest in PDA's. And others I won't share.

My list would include Yeats list. Perhaps everything on this earth leads to or from sex and death. I also see poems as paths to the unseen, unknowable -- which could be included in the sex and death arena, too.

I'm working on new songs/heavy on instrumental, lighter on words than my most recent CD. And poems, always. And I have a book of stories I'm finishing up. 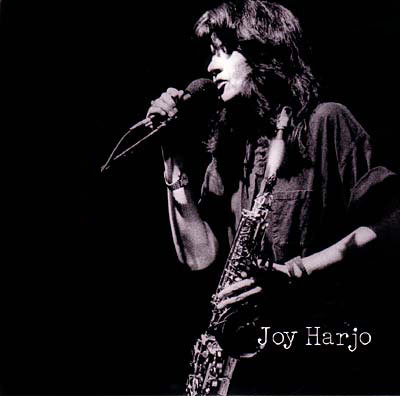 For more information about Joy Harjo, see her Web site.

Listen to an audio interview with Joy, on Native American Calling.