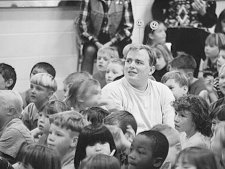 
See more about Scott at his Web site, where you can sign up for his outstanding weekly poem by email.